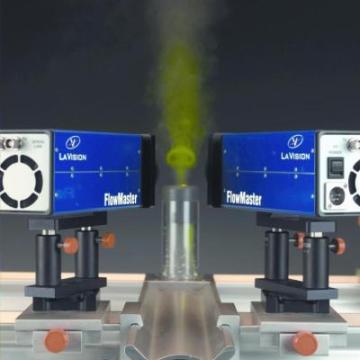 ╖╜░╕╒¬╥¬
Now-a-days, the stratified and direct injection spark ignition engines are becoming very popular because of their low fuel consumption and exhaust emissions. But, the challenges to them are the formation and control of the charge which is mainly dependent on the in-cylinder fluid flows. Today, an optical tool like particle image velocimetry (PIV) is extensively used for the in-cylinder fluid flow measurements. This paper deals with the experimental investigations of the in-cylinder fluid tumble flows in a motored internal combustion engine with a flat piston at different engine speeds during intake and compression strokes using PIV. The two-dimensional in-cylinder flow measurements and analysis of tumble flows have been carried out in the combustion space on a vertical plane at the cylinder axis. To analyze the fluid flows, ensemble average velocity vectors have been used. To characterize the tumble flow, tumble ratio has been estimated. From the results, it is found that the tumble ratio mainly varies with crank angle positions. At the end of compression stroke, maximum turbulent kinetic energy is more at higher engine speeds. Present study will be very useful in understanding the effect of engine speeds on the in-cylinder fluid tumble flows under real engine conditions.
▓·╞╖┼Σ╓├╡Ñ
╧α╣╪▓·╞╖═╞╝÷
╣▒╧╫╒▀╡─╞Σ╦√╖╜░╕
╖╜░╕╣▒╧╫╒▀